Christmas is right around the corner (literally tomorrow) and while almost everyone celebrates it for religious and culture reasons, Islam is one of the few religions that does not celebrate Christmas at all. Now I know my blog isn’t focused around religion but Islam is a huge part of my life and although a lot of Muslims are kind of iffy about explaining Islam to Christians around this time, I think it’s important to share our knowledge and faith with others who are willing to listen. I didn’t know whether or not to write this post but I know the majority of my readers are Christians and I should take this as an opportunity to share the bit I know from what I have learnt from the Quran and pass it on to you. So if you want to read the verses in the Quran that apply to Jesus’s story, then keep on readinggg.

Before we get started, I just want to give you a brief overview of Islam. From Adam to Abraham to Jesus to Muhammad (among a lot of other messengers), every single prophet’s message was to communicate the fact that there is only one God. Along with that, scriptures and miracles were sent to prove to people because as you may know, we don’t believe the things that we don’t see but even then, there were still people who disbelieved, killed prophets and altered the scriptures. The Quran came with the final prophet, Muhammad, and there is only one unchanged version that came directly from the word of God. The Quran is very clear, there is no literature like it, and it has wisdom and guidance targeted to every single human being since Prophet Muhammad PBUH (that’s us). 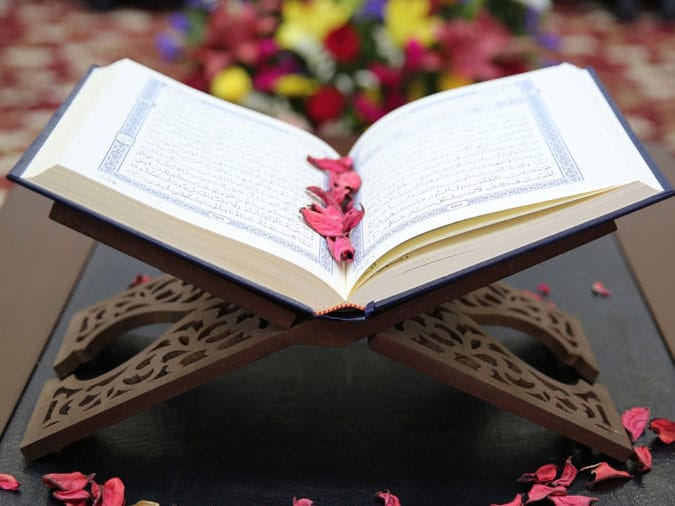 So that’s all Islam is – the acceptance of one God and that Prophet Muhammad was the last messenger. There are two lines you say in Arabic and there you go, you’re automatically Muslim. Obviously, there are other pillars you have to accept (prophets, angels, the day of Judgement..etc) and things you have to practise (prayer, charity..etc) but accepting that there is one God and his final messenger is basically what being a Muslim is. A lot of Muslims find this hard to explain to people of other religions but it’s simple and today, I will be sharing a few verses that were targeted towards Christians 1400 years ago and still apply to the Christians of today.

Anyways, that was the message of Islam in a nutshell and now we’ll get into the story of Jesus.

The Story Of Jesus

Mary, the mother of Jesus, was a righteous woman who was raised by Zechariah, who raised her with a beautiful sense of faith in God. She withdrew herself from her people in a sanctuary where she could meditate and purify herself further before her Lord. One day, the angel Gabriel visited her in the form of a human and announced that she was to have a gift of a pure son (who is to be a messenger). At first, she was very confused as no man has ever touched her but angel Gabriel reassured her that everything is taken care of and that she shouldn’t worry.

When she gave birth and came back to her people, they gave her dirty looks and said, “Sister of Aaron, (note: Aaron is believed to be her sibling named after Moses’s brother or could have been the way they identified from tribes – so essentially, they were saying that she was from a noble tribe or family and questioned why she would do such a thing) your father was not an evil man and your mother was pure.” (Quran 19:28)

At the time, she was commanded to abstain from talking for three days so she pointed at Jesus who spoke and said:

“I am a servant of God. He has given me the scripture and has made me a Prophet. He has blessed me wherever I may be and had made prayer and charity my duty as long as I live. And to cherish my mother. He did not make me domineering or graceless. Peace was on me the day I was born and will be on me the day I die and the day I am raised to life again” (Quran 19:30-31)

probably their reaction because a baby just spoke.

Also, in case you’re confused later on when Jesus says the day I die, he implies the day of judgement where he’ll come down to Earth and then die with all of us and THEN raised with all of us again for the final judgements. Jesus did not die on the cross but we’ll get to that later.

“This was Jesus, son of Mary. This is a statement of the Truth of which they are in doubt. It would not befit God to have a child. He is far above that: when He decrees something, He says only, ‘Be’, and it is.” (Quran 19:34-35)

These two verses basically describe the contradiction of the belief of one God in Christianity. Just like how God created man out of nothing the first time (Adam), he could create man with no father the second time.

“Indeed, the example of Jesus in the sight of God is like that of Adam. He created him from dust and then said to him, “Be”, and he was. (Quran 3:59)

God is self-sufficient and ever-living and does not need a son to carry His legacy or wealth like how a king would have a son to do that.

Jesus taught that love and mercy overcome hate and anger. He was sent to reinforce this message which was in the holy book, “Injeel” (Bible). He was granted the ability to perform miracles by the will of God such as healing the sick and reviving the dead. He soon attracted groups of people who would listen to his teachings. As his message began to gain acceptance, a small group of hypocrites plotted evil against him. They eventually caught him and planned to crucify him on the Roman cross. However, he never reannounced him faith in One God. Jesus managed to escape from the hypocrites and was saved from them. The mob who chased after him, killed a man who resembled Jesus instead (in some versions of this story, the man was one of his enemies and in others it was a companion who volunteered but what is clear is that Jesus did not die on the cross.)

“And because they disbelieved and uttered a terrible slander against Mary, and said ‘We have killed the Messiah, Jesus, son of Mary, the messenger of God.’ They did not kill him, nor did they crucify him, though it made to appear like that to them; those that disagreed about him are full of doubt, with no knowledge to follow, except the following of assumption: they certainly did not kill him. Rather, God raised him up to Himself. And God is Almighty and Wise.” (Quran 4:156 -158).

It was someone who resembled Jesus that died on the cross which is what caused the confusion. But God is a witness to everything as he is the All-Seeing and All-Knowing to what happened that day and describes it in the Quran.

There are many verses in the Quran that are targeted towards Christians and Jews (referred to as People of The Book or People of The Scripture) and but if you could pull anything out of today, it definitely has to be this verse:

“Oh People of the Book, do not commit excess your religion, (note: become extremists) and do not say anything about God except the truth: the Messiah, Jesus, son of Mary, was a messenger of God, His word, directed to Mary, a spirit from Him. So believe in God and His messengers and do not speak of a ‘Trinity’- abstain from this, that is better for you- God is only one God, He is far above having a son, everything in the heavens and earth belongs to Him and sufficient is Allah as Disposers of affairs.” (Quran 4:171)

And that’s what I want you to pull out from this post.

I know this is the opposite of what Christianity is about but the Quran came down to confirm the previous books. If the bible wasn’t changed or had no added words to it, then the Quran wouldn’t have been sent down. Does that make sense? Finally, I want to share one last verse that talks about Jesus mentioning the final prophet and message coming after him:

“Jesus, son of Mary, said, ‘Children of Israel, I am sent to you by God, confirming the Torah that came before me and bringing good news of a messenger to follow me whose name will be Ahmad.’ Yet when he came to them with clear signs, they said, ‘This is obviously sorcery.’” (Quran 61:6)

I don’t mean to shove Islam in your face and expect you to be like “okay no more Christ-mas” but I just hope you were able to get something out of this post today. I was putting it aside for so long and even if one person read this and thought about it, I’d be grateful. You all mean so much to me and I had to introduce you to Islam at least once before we leave this world. If you want to look more into Islam..

Anddd that’s all for today. If you have any questions, leave them in the comments! If you want to reblog this to let your friends be aware or to get their questions on it, feel free to do so. Also, I was thinking of collabing with a few of you to ask questions and understand each other’s faiths so make sure to comment down below if you want a follow-up email on that.

What have you heard about Islam before this post (ie.in school, from parents etc)?

Which verse surprised you the most?

I’ll see you guys in my next post. Happy holidays!
Bayyy 💞

51 thoughts on “The Story of Jesus in Islam”